I’m looking at an image of a woman in white, barefoot, on the beach. Wearing a headscarf and Indian Bindi, stretchy synthetic material extends past her palms, cut to expose heavily ringed fingers. Gauzy scarves blow in the wind, long white pants are covered by a loose flowing skirt and macramé belt.

I can’t help but notice the trashcans.

The location is San Francisco’s Baker Beach. Part of the Presidio, the site was originally home to the native Ohlone, before Spanish settlements introduced disease, displacement, and forced labor. El Presidio was established in 1776, fell under Mexican rule for 24 years, then was seized by the U.S. Army. Over 148 years, the military transformed the Presidio grounds from empty windswept dunes, to a verdant military post, complete with disappearing gun installations.

Baker Beach is a scary place. Home to shark attacks, rip tides, large waves, the original Burning Man festivals, and the Nude Beach Olympics. When I look at the performance images, I see rocky sands, dead kelp, and cypress trees that were planted by the U.S. Army. A graffiti character leers from a concrete wall, as black birds land amidst washed up sea life. It’s cold. The fog is heavy. Northern California doesn’t have beaches; it has angry oceans.

My one attempt at yoga consisted of popping in a VHS tape sometime in the late 90s. Sitting on my couch, in pajamas, I watched a blonde woman contort her body on a pristine white beach. And even though I never joined her in learning how to do the upward dog or backwards peacock or one-legged stork, I understood the desire to want to transcend the space of my apartment’s living room through movement and the body.

I see this figure in white also attempting to transcend her surroundings. Ignoring the wind, the rocks, the people in hoodies gazing at their shoes as they walk along the beach. Arms outstretched, as if attempting to calm the bay, moving through the landscape, but stuck. Frozen by the image, but also through the contradictions of site, and the imposition of the figure onto the landscape. WHITNEY LYNN 2011 Photo courtesy of Travis Brinster 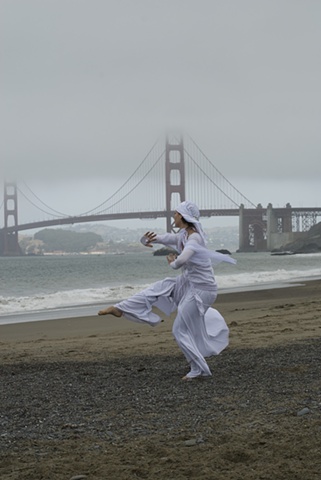