“More than 150 Bird species are known or suspected to have disappeared since 1500, almost entirely because of human activity, and the process continues today: wild populations of at least 17 species were lost in the quarter of the 20th century. There is no road back for the Guam flycatcher (Myiagra freycineti), devoured by alien tree snakes, and no second chance for the Columbian grebe (Podiceps andinus), a victim of wetland loss, pollution, over hunting, and predation by introduced trout. Extinction officially threatens 1.211species – roughly one in eight of all birds. Of these globally threatened birds (GTBs), 179 are critically endangered. They stand at the brink of oblivion because of rapid declines or dismally small populations or ranges. An estimated 77 species are represented by less than 50 individuals, rendering them very vulnerable to environment fluctuations and catastrophes, to demographic vagaries (one year, perhaps, most offspring might be male), and to a variety of social and genetic disruptions. At last count there were 10 pairs of Tahiti monarch (Pomarea nigra) in French Polynesia and 12 wild Bali starlings (Leucopsar rothschildi). Time may have run out on Hawaii’s po’ouli (Melamprosops phaeosoma) when the last individual in captivity died late last year and the two in the wild haven’t been seen for some months. Taking into account this overcrowded emergency ward of ailing species, and given the time lag between habitat loss and extinction, a sizable proportion of the world’s birds may be living on borrowed time. But extinction is only part of the story. Even if extinction is averted, a world full of rare birds, clinging to existence in captive breeding facilities and pockets of protected habitat isolated in an overpopulated, intensively cultivated, industrialized landscape, is hardly cause for celebration. Unfortunately, there are plenty of signs that such a world looms before us. “

The case in a nutshell: The Micronesian Kingfisher is from Guam and there is quite a story to tell about the species. Back in the 1940’s the residents of Guam began noticing a large brown tree snake on the island. There are no native snakes on Guam but these must have been stow-aways on cargo ships during the war. At first, it wasn’t so bad because they ate rats and mice. However, in a few years, there were a lot of snakes and incidentally, a lot less birds. It took forty years for someone to realize that the rise of snakes was linked with the decline of birds on the island! By the time scientists realized what was going on, it was too late to save the Kingfishers in the wild. They captured 29 birds of the few that remained and placed them in zoos. This last ditch effort came just in time as the unlucky birds that stayed in the wild soon perished. If it weren’t for zoos, this species would be totally extinct. Barely doubling their numbers in roughly 20 years, they still have a large uphill battle for survival. Like the quote says above, even though extinction was averted just in time, a small number of captive birds, the only birds of their species in the entire world, is quite a sobering thought. One of many solutions we can help with: Zoos, somewhat by accident, have abandoned their origins as a place where urban folk can ogle at the worlds’ oddities, and have evolved into some of the foremost places of research, conservation and a safe haven for endangered species. Go to your local zoo. We in Cleveland are blessed with an incredible zoo and rainforest and they are one of the establishments that houses breeding programs for several rare species. Find out about the zoo, the species that are there and what the zoo is doing to help. It’s quite remarkable. We have the ability to be educated about animals like the little kingfisher, who are put on display to help us understand their story so that we in turn can carry that forward to the rest of our own lives. We can help by becoming educated and aware of the world around us. We can facilitate the education of others as well. We can personally influence the outcome of these creatures simply by knowing what they are struggling with. That is the best way to start. 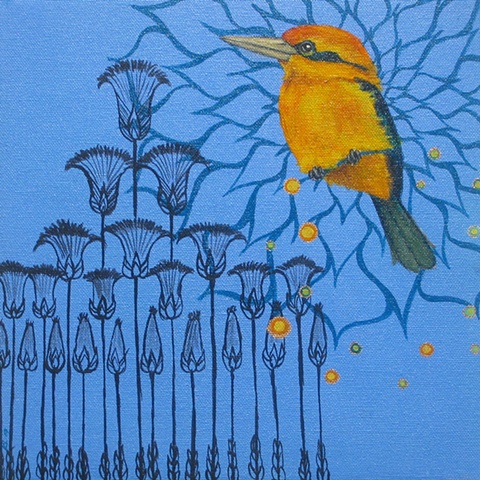