This is a collaboration piece between Michael Barrett and myself where Michael and I “passed” a 4 foot diameter 150 lbs. truck tire back and forth to each other. By “passing” I mean that we will were flipping, or throwing the tire from one of its sides to the other between ourselves until one of us suffered from complete exhaustion and cannot pass the tire any longer. It is an endurance piece.

It is a very robust act that is subverted by the feminine, almost the afore-decided loser of the strength endurance competition, yet anything could happen. In essence we are playing catch, a game played stereotypically between members of the male gender, father/son, boys on a team, boy/tomboy girl, etc. it’s not a game often played by what is considered a “girlie” girl. Yet Catch still has a genderless quality in its complete and open accessibility. No skill other than throwing and catching is required, both of which can be learned and improved upon as the game is continually played. We are purposefully not catching the object we throw between ourselves, but rather hurtle it in a violent expulsion of energy. This expulsion of energy mimics an ejaculation of sorts, a continuing thrust and release, thrust and release, back and forth, until no more energy is left to complete the task at hand. The Sissyfusian object of continual labor, of futility, of bliss within that purposeful purposelessness is all at work in the piece, excepting that we have human limitations unaided by the gods that must render a finite moment to our epic struggle. The multiplicity of images, the varying directional observation enhances a sense of voyeurism as well as creating an eternal loop of the present. Being viewed from a different angle than the regular gaze, it disassociates the viewer from a standardized way of viewing, changing perspectives, yet exponentially amplifying the need to look. As the performance continues, exhaustion of the performers becomes apparent. This creates a different quality to the gaze, replacing the slightly sexualized fascination of two bodies in excertive motion, to a benign horror of observing dogged, unrelenting and ever-increasing difficulty and pain. Like the fascination with slowing down to see a car wreck, actions such as these become increasingly difficult to watch yet an unyielding curiosity compels a viewer to keep watching. Who will give first? At what cost? It is an epic battle, of the sorts played in the ball fields of the Mayans, acted out in the wrestling matches of the Greeks, a recreation of the struggle to survive, the struggle to create, the ultimate test of the basic and essential human form to its fragility and limitations. Yet it is the will that enforces this test, the unfaltering drive that lives within all of us that enables us to move our human form, and at it’s very core, it is not merely the capabilities of the human body we are pushing to the limits, but the very basic essence of what animates that form, the want to survive, the need to create, the will to keep going no matter what. 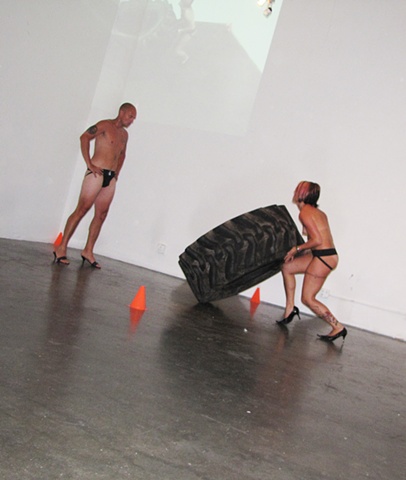