Performance and Interactions > Building a Body 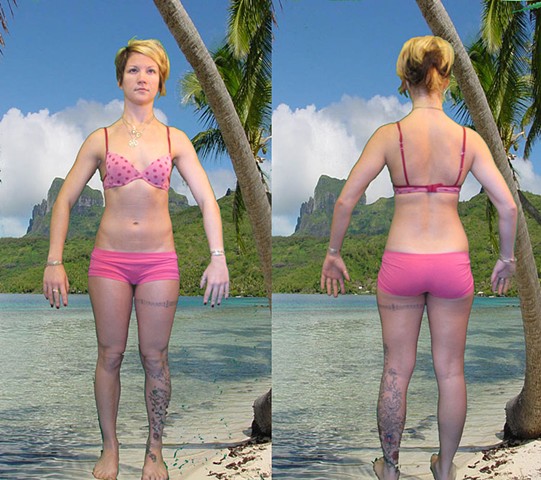 Pose 1
Documentation of performance
variable
next >

I turned 30 in October of 2011. This, and graduating from grad school, has caused me to think a lot about a lot of things. Where is my life going? What am I doing with my life? What are my goals? Where should I live? etc. etc. The list goes on and on. One of these things was the realization that not only grad school, but the preparation prior to it has caused my once toned and shapely body to be not so toned anymore. Not to say that i was that unhappy with my figure overall, but let's face it, we could all be in better shape no matter what we look like with clothes on. It was really more that i knew i had lost strength and muscle tone. I felt like I didn't have the physical strength anymore to keep up with my life and straight up, that had to change.

I knew that i wanted to do something about this and now was as good a time as any to do it. i had injured my hips over the summer setting my physical workouts even further back than i had wanted. I got bursitis in both my hips and I could barely walk for 3 months. With some yoga and small strength building I was able to get back something, but not much. I had a long way to go. The problem was that i had lost so much muscle tone that i was honestly afraid of injuring myself if i went back at the weights like I was used to doing years before. What to do?

I've always had the belief that if something is supposed to be in my life, it will fall into my lap. This has always been the case. if i really need something, it appears before me. If I have to fight a constant uphill battle, then sometimes it's a sign that perhaps I am doing the wrong thing. I was toying with the idea of getting a trainer, but then who would I get, where would I find this person?

At the end of November, I was recovering from pink eye. I was at the end of the illness and not contagious anymore, but my eyes still wanted nothing to do with contacts. I wore my giant tortoise shell nerd-o-rama glasses to work that day and then went to the gym afterwards. I had accidentally packed a pair of shorts and a tank top that didn't match at all, orange cut-off sweat pants shorts, a hot pink sports bra, and a grey tank top. All in all, not my finest fashion hour and I was really hoping that no one would talk to me and leave the nerdy girl alone to do her workout in peace.

I was wrong. The first equipment I went to was the lat pull-downs and right after my first set, the guy next to me struck up a conversation. He was a tall, statuesque African American man with amazingly bulging muscles. I was an eighth of his size. Turns out he's a trainer and coincidentally i've had a secret fascination with bodybuilding and bodybuilding shows for as long as i can remember and low and behold, that's what his specialty is. So, long story short, we hit it off and I am getting ready for my first figure competition this July.

Figure competition is one step up from bikini modelling and one down from bodybuilding. Basically, I'm going to have muscles but I'm not going to look like a dude. I feel like it's a happy medium and something totally attainable. Why do a competition at all and why not just get fit for fits' sake? Well, I suppose you could call this a 1/3 life crisis of sorts. I need a goal, something to work towards, something that seems crazy that I know that I can do and do well. Some people go travelling, some people buy a fancy car, I weight lift. It makes me very happy. It always has. It's sculpture of your very own physical being. It's a practice, it's art, it's body manipulation in a strange modern greco-roman sense. It's also most definitely performance. All of this I will talk more about later. . . . .

This is the first photo i took of myself on January 9, 2012. Mind you i've already been going to the gym and just doing a plain old workout, but this is when i started to take things seriously.

I began my workout regime seriously that same week. My trainer, Joe, told me that i had to start eating 100grams of protein. That's a lot of food. Thankfully I work at a sushi/japanese grill restaurant so I certainly get my fair share of raw fish. On top of that, I eat about 3-4 hardboiled eggs a day, nut butters of various kinds, a protein powder in yogurt, chia seeds and other nuts, and some main protein like chicken, beef or pork as my dinner. Let me reiterate that it's a lot of food and I thought I ate a lot before.

My workouts are structured. I go to the gym 4 days a week and I alternate what muscle group I am training that day. Day one is Biceps and Hamstrings for example. Day two is Back/Quads/Abs and so on. I do reps of 20, 15, 8 with increasing weights until I max out with what I can lift. I will also go more into detail about his later. . . .