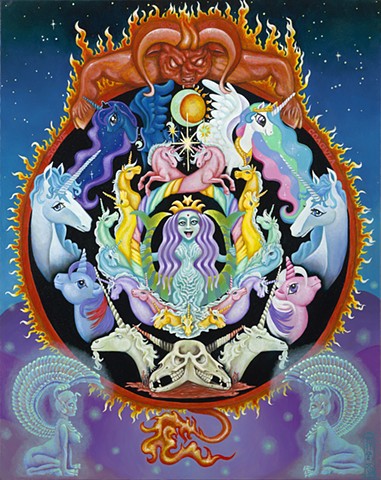 Things are not often as they first appear. There is always a surface impression, something that impacts you immediately and so often we take that as is and turn away. What does it take to keep looking? Perhaps that second look will reveal something new and catch your interest a bit longer. I’ll start with the surface. There’s a Starbucks logo surrounded by unicorns and then some My Little Ponies and some 80’s movie references you feel like seem familiar from childhood. This is true. It is these things. It is also so much more.

Like a true mandala, I’ll start in the center and work my way out. The Starbucks logo is zoomed out to reveal the actual Starbucks logo from the original Seattle coffee shop. I like it much better than the anaesthetized version we see on our coffee cups daily. My Starbuck has her tongue out and a bhindi on her forehead. She is making the familiar facial expression of the Hindu Goddess Kali, the Great Mother and the Great Destroyer. She is both the Creator and the Goddess of Death, controlling what comes into this world and what goes out of it.

Starbuck Kali is giving birth to the new cultural consciousness and is my bold way of saying that we need to stop dumbing down sexuality, dumbing down creation, dumbing down and numbing out death and true, poignant experience. This is equally as important as joy. Because you cannot have pure joy without pure depth. They work in tandem. And until we deal with our baggage, it’s only going to keep haunting us and biting us in the butt and we will never truly move forward.

Through liquid unicorns and the history of this magical creature, the mandala continues to unfold. Princess Luna and Princess Celestia from the most current iteration of My Little Pony: Friendship is Magic oversee this process at the top of the mandala. The Princesses are sisters who had a tumultuous relationship (as Light and Darkness usually do) but managed to work out their problems by truly communicating their feelings to one another. Now they work together, Celestia tending to the kingdom and their subjects during the day and Luna tending to them during the night in the dream realm. This relationship between the Sun and the Moon, Light and Darkness is what makes the world go ‘round. It is how we dive deeper into our Self and explore the facets of our diamond-like nature. Placing them at the top of this mandala is making sure that the revolution is not stagnant. What began with Starbuck Kali at the center, giving birth to the unicorn consciousness culminates with the two Princesses, Sun and Moon, where the Sun brings it into the world and the Moon takes it back into the darkness where it can be reborn again through the center.

Is your interest peaked? This is just the tip of the iceberg.